One of the annoying thing with this 'SPECIAL' edition of the firmware are the default settings:

One of my goals while disassembling the formware was to 'fix' these defaults settings. I was wondering wether they where located in an undocumented part of the EEPROM or directly as hardcoded values in the firmware itself.

I have partially understood the setup routine, the one called from the RST vector; the interrupt vector is located at addresses 0xFFF2-0xFFFF, with the RST routine address being at 0xFFFE. In my case, the RST handler is located at 0x5F19:

But completely disassembling the whole RST routine is slow and difficult. At some point, I found that a smarter approach would be to compare the content of the RAM after a fresh start and after having modified some configuration values, like the Frequency Offset.

The RAM addresses where the offset values are documented in the Service Manual, unfortunately, each model as its how address map, and no available Service Manual covers the EIP 545B. So I first needed to find where the frequency offset is stored in RAM so I can then look where this area is modified in the firmware.

Thanks to the TEST10 allowing to read any address in the address space (be it RAM, EEPROM, EPROM or even I/O registers), I wrote a simple Python script to read the whole content of the RAM via GPIB.

It's very slow, since I did not find a way using GPIB commands to read 2 memory addresses without quitting the TEST10 mode between two reads. And I had to add several sleep() since the EIP is pretty slow to respond to GPIB commands. A complete dump of the 2ko RAM took somethin like 15 or 20 minutes.

I did not even wrote a script, in fact, just throw some code in an IPython session. However, the crude code looks like:

This allowed me to quickly find where the Frequency Offset is stored: 0x0276-0x027C (using the format described in the service manual).

So I could then look for this Freq. Offset address (OxO276) in the firmware: It's used directly only a couple of times in the code, one of them lloking like:

It worth noting that this snip of code is executed shortly after intializing the RAM content to zero.

So the result of this piece of code is that the content of the RAM at this 0x0276 address is:

ie., conververted in frequency: -160MHz, the initial value I want get rid of!.

So I just have to replace these code by NOP instructions and it should be fine for the Frequency Offset, which I haven't done yet (I was waiting for a cheap EPROM eraser from eb, which just arrived).

Concerning the resolution, some clue can be found just after the previous routine:

I have also investigated a bit the sensitivity problem I have on band 3: I can hardly detect signals lower than -10dBm at 1 or 2GHz, where it should be able to catch a -30dBm.

I've tried to recalibrate (on that frequency range) the YIG filter, it did not help.

Following the advise of HighPrecision on the eevblog forum, I did give a check at the SMD capacitors in the IF amplifier/detector detector part of A201. I still need to investigate more, but I haven't found an obvious culprit in there.

But since I had disassembled the A203 unit, I also gave a closer look at the YIG filter itself, taking pictures with my small USB microscope.

On one side is the ceramic support for connections from the output YIG coupling loop: 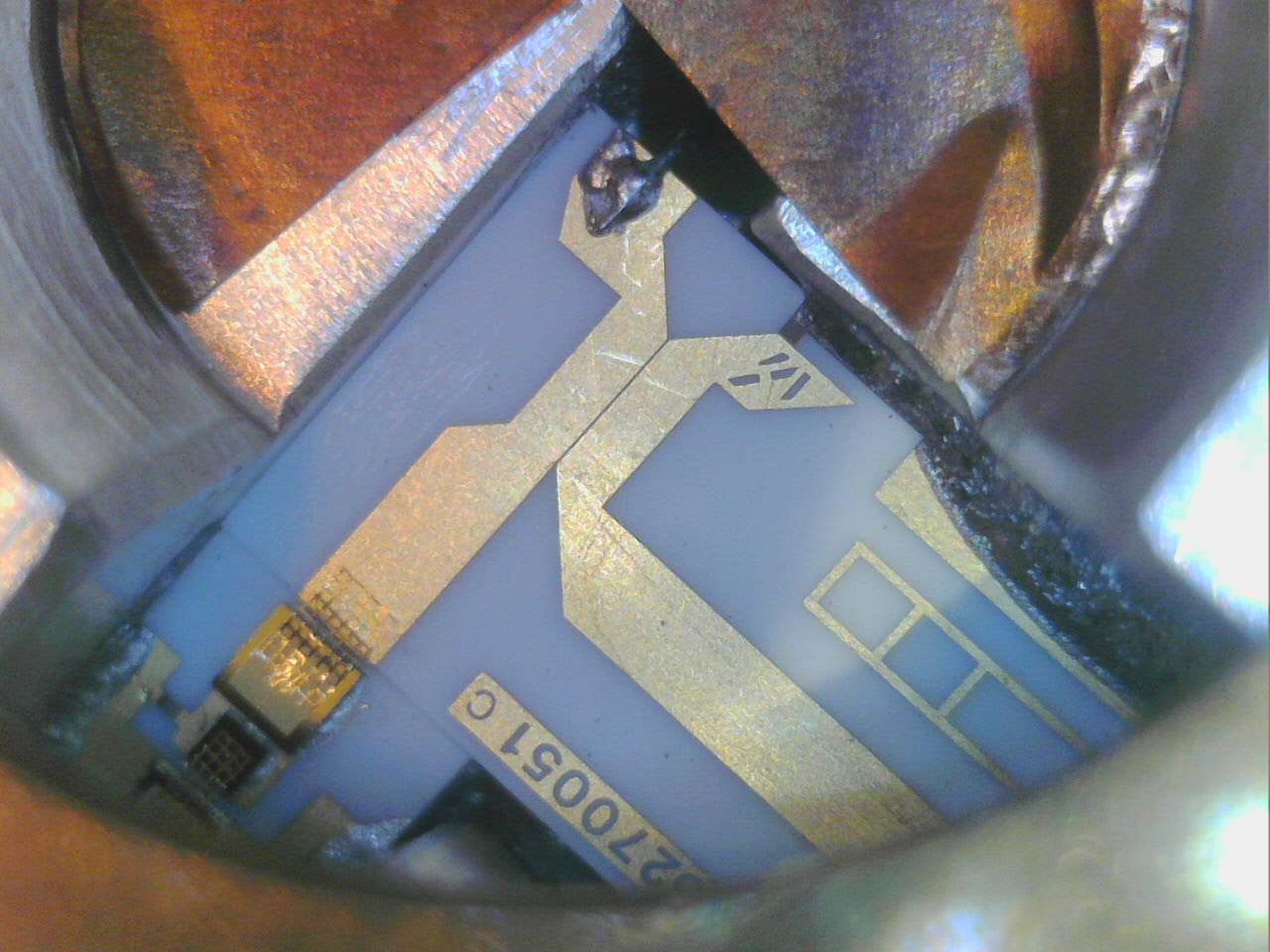 On the bottom side, we can see the YIG spheres and the coupling loops: 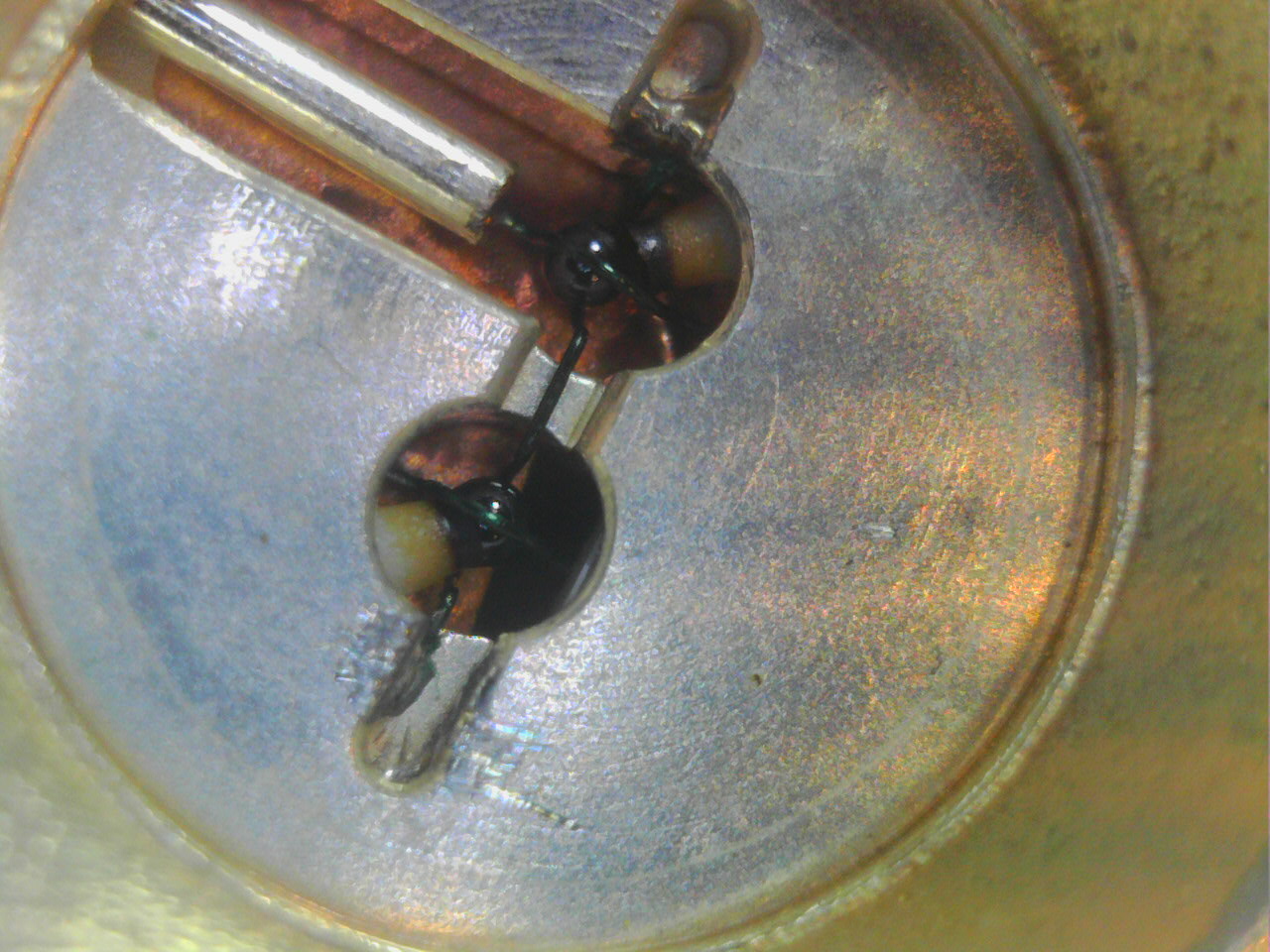 So this filter consists in a 2 stage bandpass filter (with input and output couplig loops at 90° each other).

Having a closer look, the problem appears:

As can been seen there, the YIG sphere took off the holding rod. Tha cage made of the 2 coupling loops is small enough the sphere stayed there, but it is not at the center of the 2 loops any more, nor it is correctly orientated. No surprise the input signal is so low (in fact the suprise is that is still works somehow).

I tried to move the sphere a bit, using a sharp (as sharp as possible) wooden stick under the USB microscope, but it is really hard to orientate the sphere (which diameter is around 0.1 or 0.2mm).

I'll try again, just in case, since I can see the mark of the rod on the sphere, I think I may be able to roughly reorientate the sphere, but it is really hard to do without micrometric actuators.

By the way, for thoses interested, I found these 2 simple documents interesting to begin to understand how a YIG oscillator and a YIG filter works: