This post is a quick presentation and teardown of a small bench power supply I bought on ebay a few weeks ago for something like 40€. 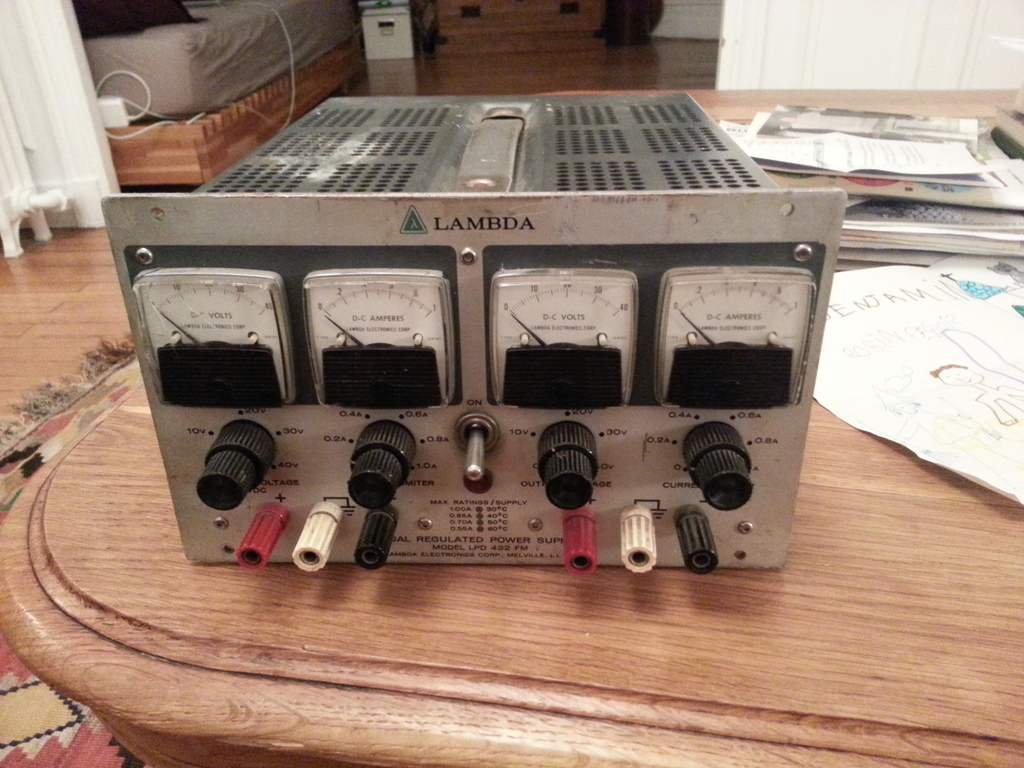 It's an old unit, not sure it's exact age, but the components inside the unit seem to have date codes around 1971/1972. So my unit is probably from the late 1972 (older than me!). This series of power supplies seem to have been built for a very long period, since one of the available user manual on the internet seems to be dated from 1987 (but it's for the "A" version).

It's a dual regulated linear power supply which specifications are:

It seems to be "remote programmable", and have remote sensor entries on the back of the unit. 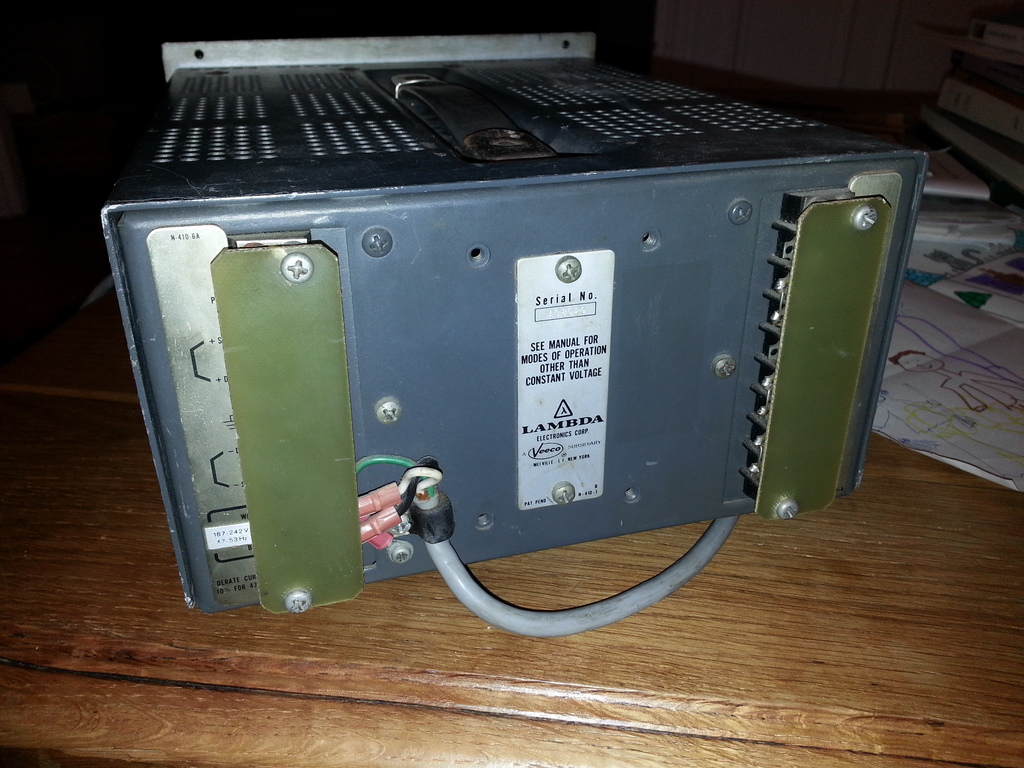 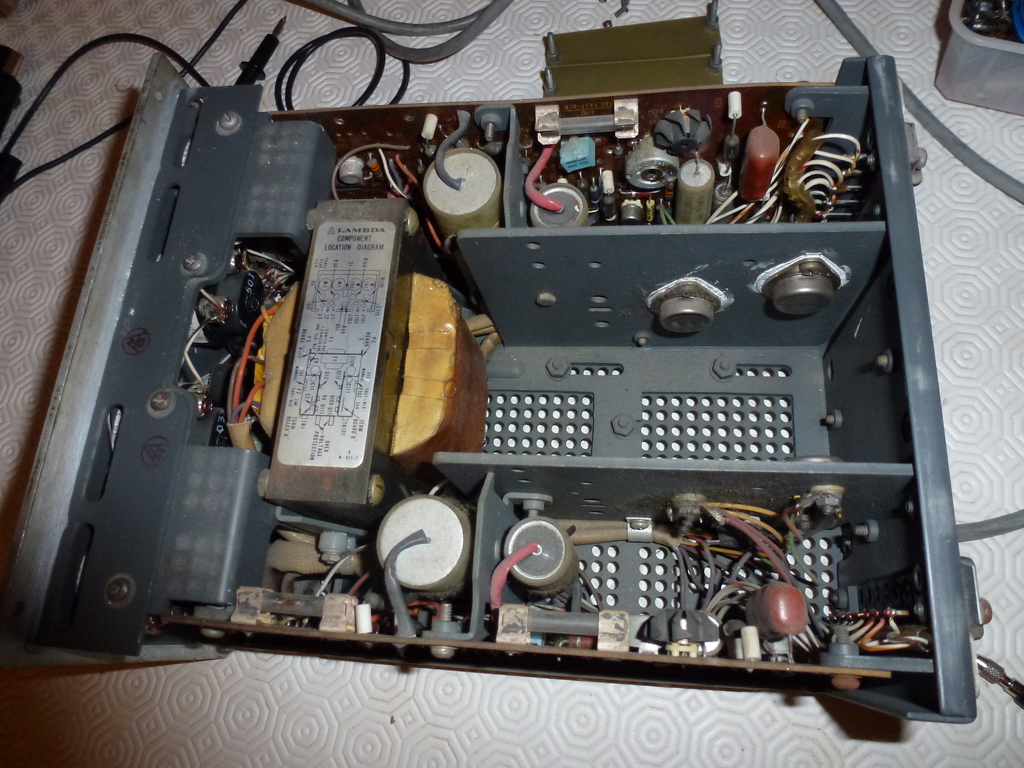 Each of the 2 power supplies have a regulator board on each side of the enclosure. The power transformer is sitting at the center of the enclosure and shows a nice "Component Location Diagram": 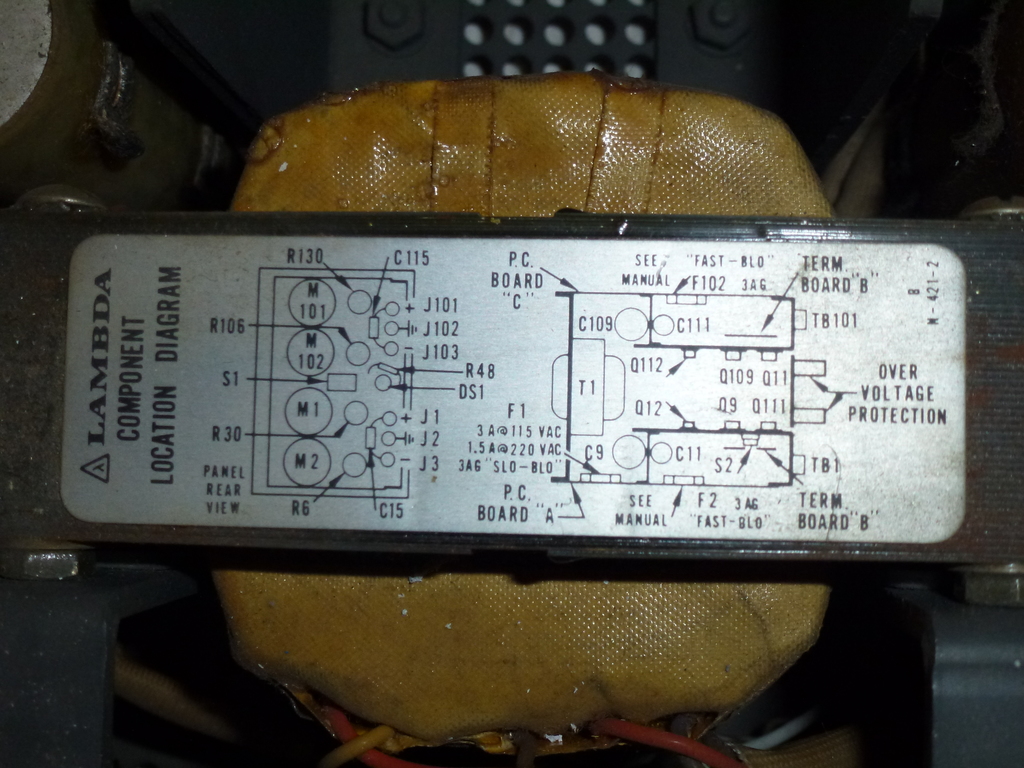 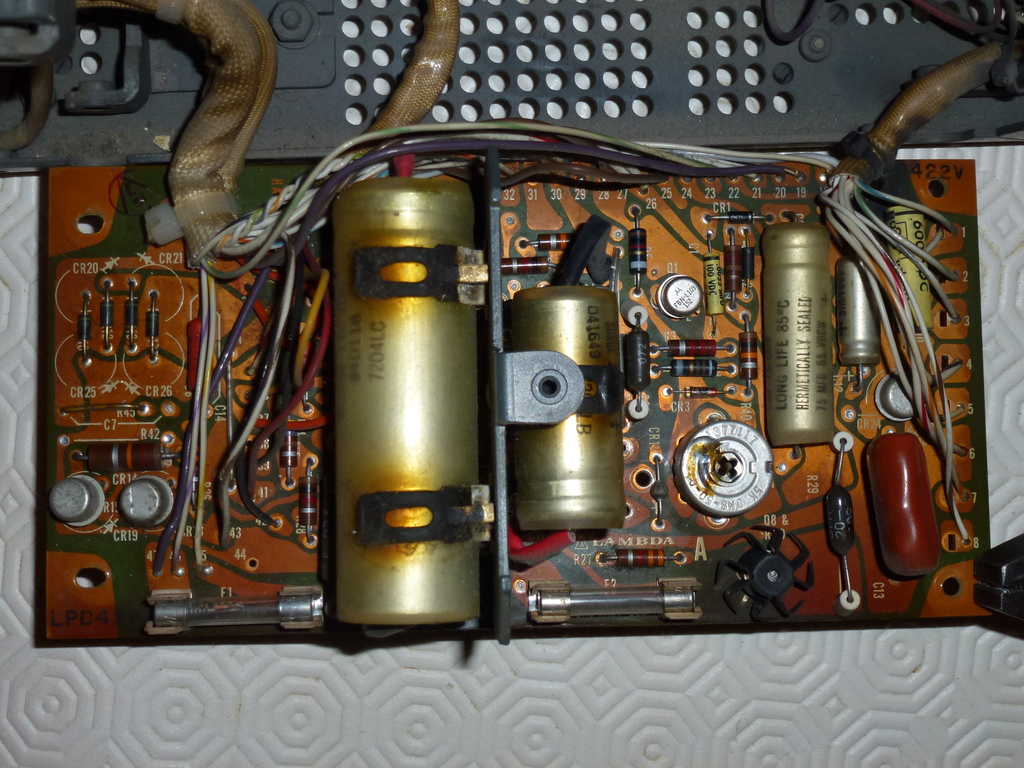 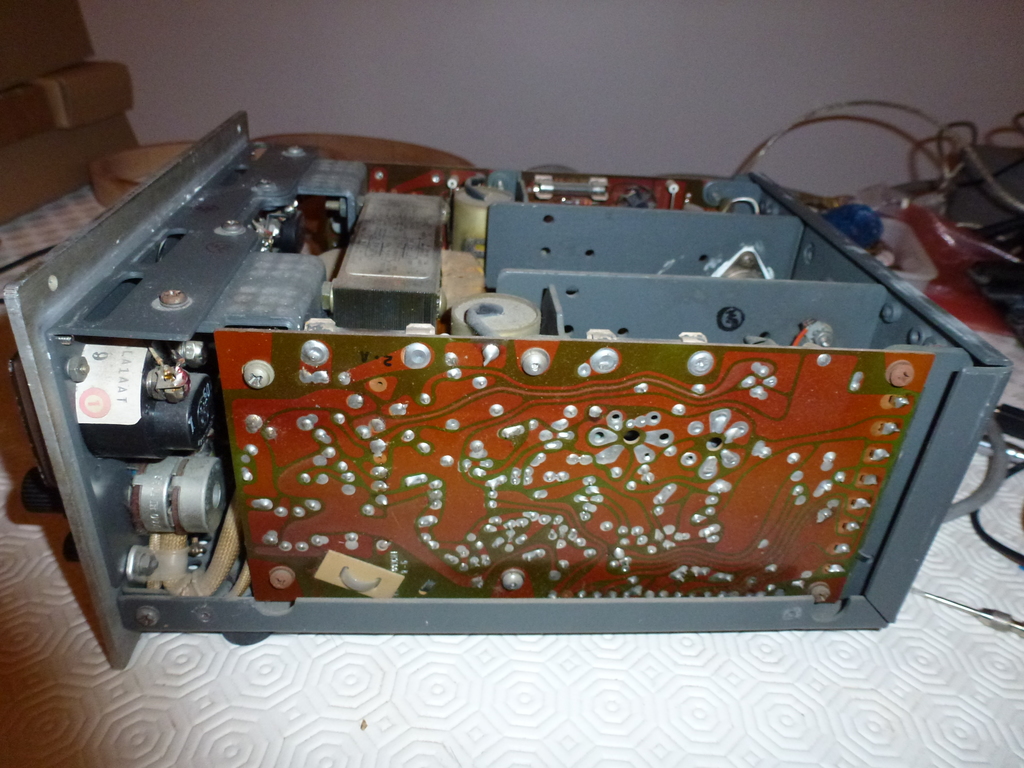 The component, especially the big caps, looks like original parts and the PCB is a bit burnt by the small power transistor, but nothing too scary.

The power supply works nice. No smoky or smelly behaviour on load, and the regulation looks still reasonnable.

In these quick measurements, I've not used the voltage remote sensing of the power supply.

First, a view of the noise at the output of the PSU; 0V, no load: 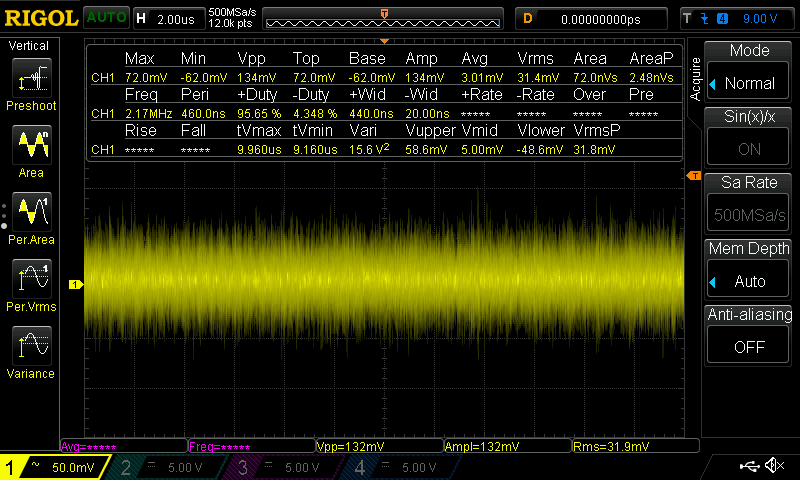 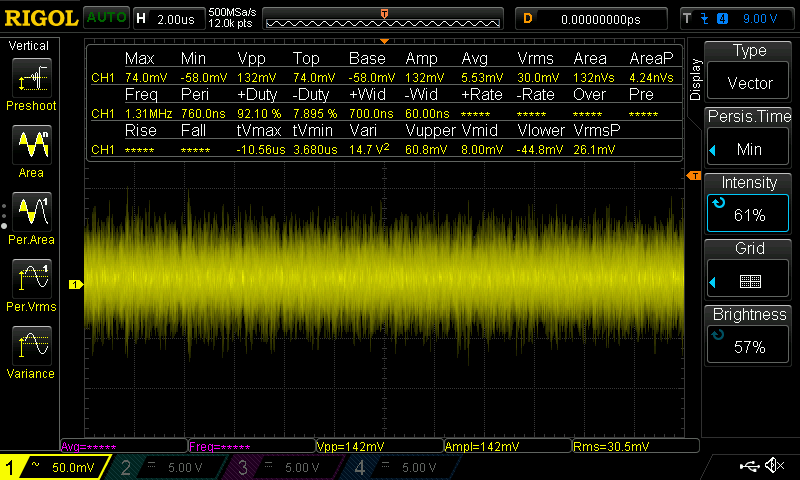 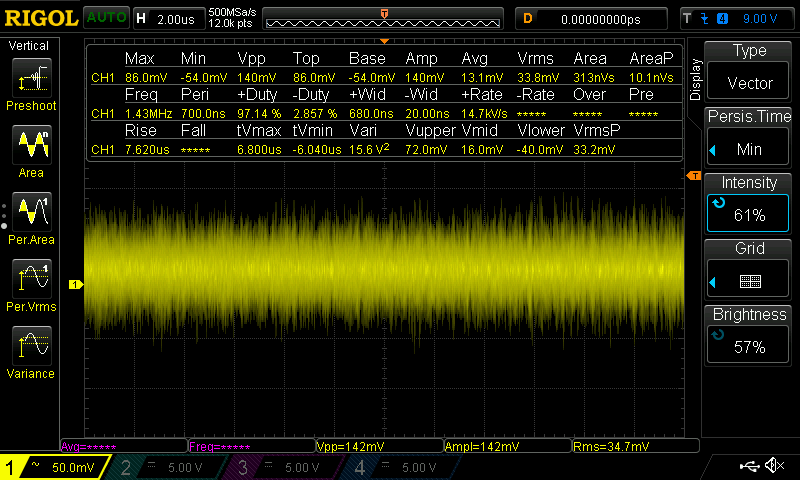 Then, with the ZPB30A1 electronic load <{filename}/ZPB30A1.rst> connected but not consuming any current (20V, 0A): 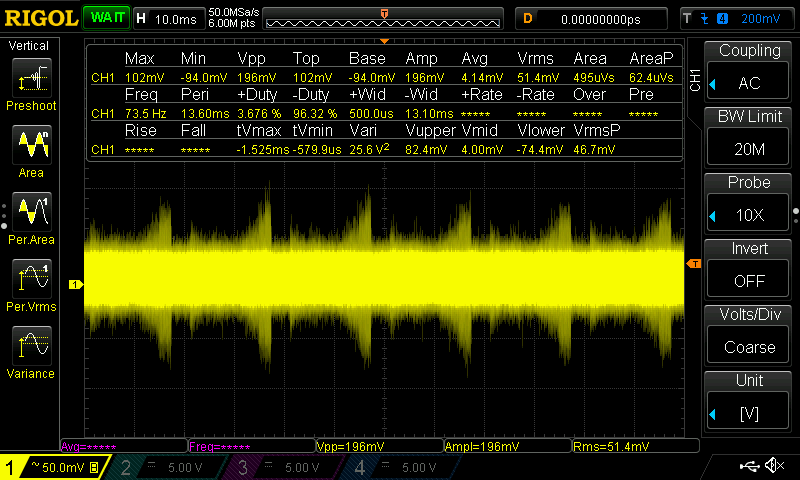 As you can see, there is a much higher injected by the electronic load. When measuring the visible pattern: 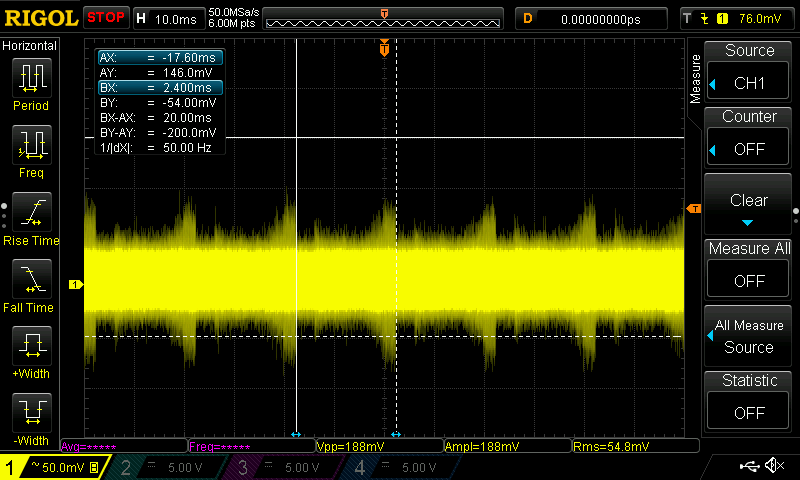 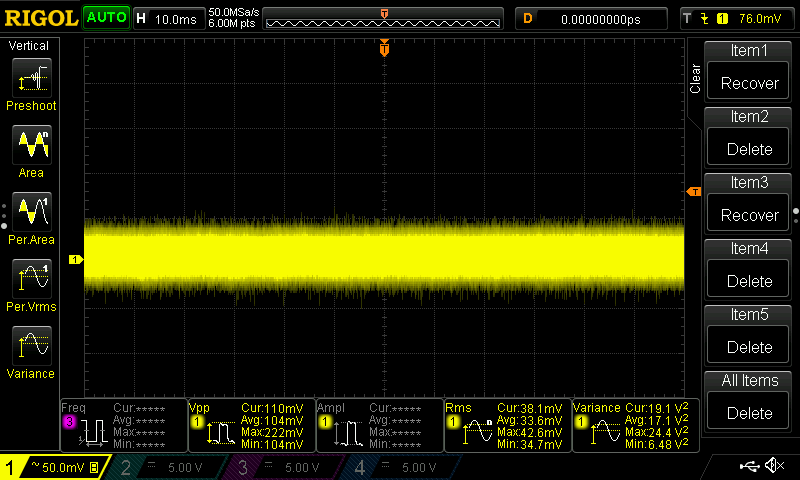 The injected noise from the mains has vanished, and the RMS noise level is back to the same value as it ws with no load (around 40mV). 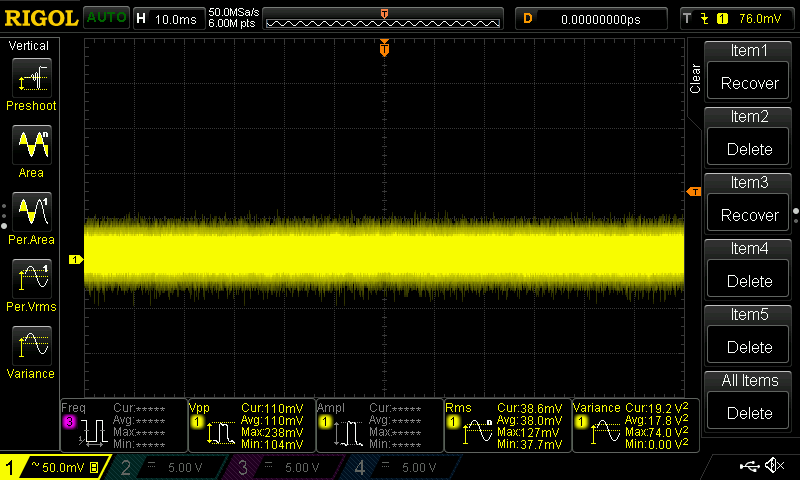 Now, trying to capture the transient curve when activating and deactivating the load. As I cannot remote control the load, I cannot create a nice square load pattern which make this measurement much easier. So I've just adjusted the trigger level to single capture the moment I press the 'on/off' button of the load: 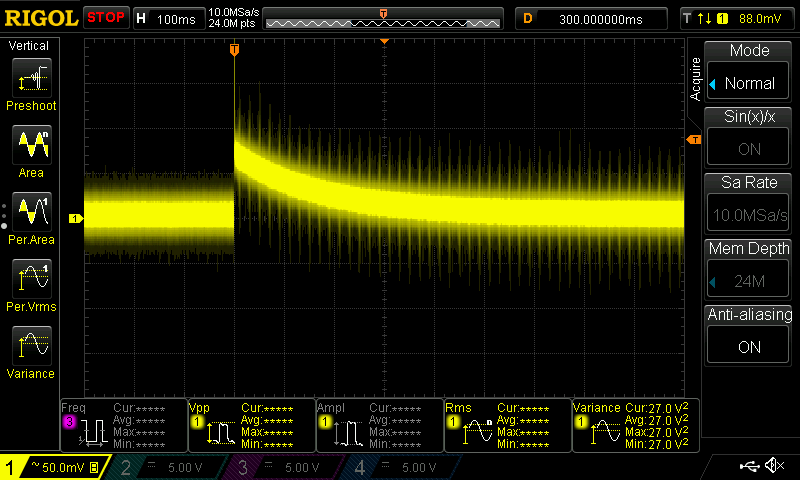 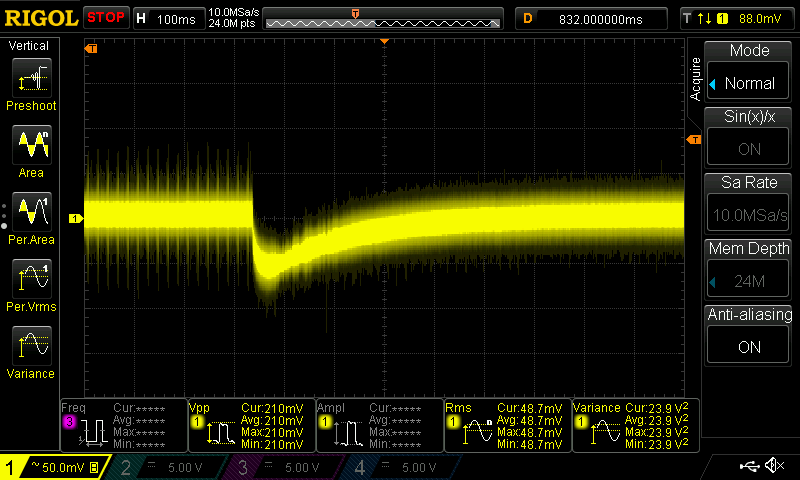 The overshoot is around 75mV and takes around 200ms to vanish, and the undershoot is a bit less (50mV) and lasts 150ms.

At one amp, the ripple voltage is around 8mVpp and 3mVrms: 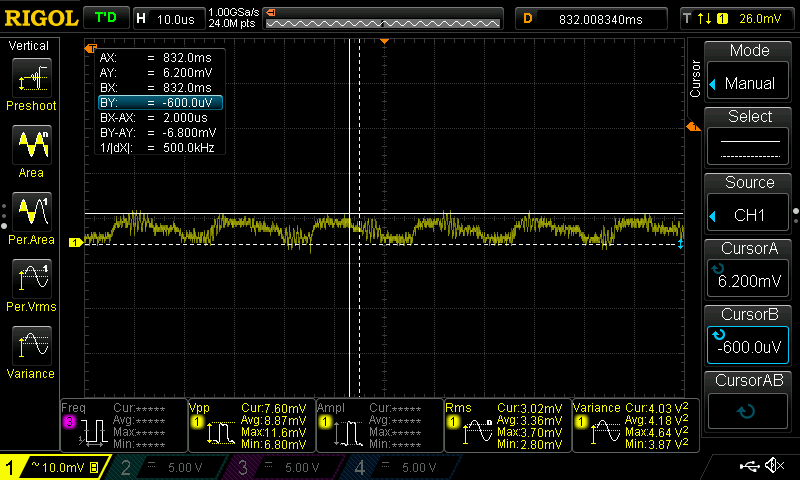 It's quite out of spec: ripple should be less than 500µVrms and 1.5mVpp, but it's not really a surprise considering the age (over 40 years old!) of the PSU. A future recap may improve its performances back to its original specifictions.

I also plan to replace the banana jacks on the front panel (their barrels are very short, less than 1cm: I cannot plug a standard banana plug more than half its lenght). I may also try to bring the remote sensor plugs on the front panel (with a pair of easy to set or remove jumps): I like to have the sense terminals ready to use.