In order to build a replacement display for the HP34970A data acquisition unit, I needed to understand the communication protocol between the CPU board and the front panel assembly.

The unit is built with four boards:

The commnucation between the different system blocks is done with asynchronous serial links. They use the rather uncommon bit rate of 187500 baud, with a classic 8E1 schema (note the even parity bit).

The communication protocol between the main controller (CPU) board and the display panel (DP) consists in "datagrams" sent using the general pattern:

The initialization transmission is:

If a key is pressed during while powering the unit on, then the initialization of the Display Panel is frozen (with all elements of the display lit) until the key is released. In this case, the initialization packet adds the key code of that key, typically used with the Shift key pressed in to force a full test of the device (in this datagram, 0x0C is the keycode of the Shift key):

Two (or more) datagrams can be transmitted in a single "transmission", ie. without sending the EoT byte, eg.:

When the user press a key on the front panel, a slightly simpler "packet transmission" occurs:

The known command bytes sent by the CPU for now are:

Sending data to the main display

The main display consist in 13 17-segments digits, in which the character is displayed by a main 14-digits, and the punctuation with 3 segments (2 dots and a comma, allowing to represent the signs ".", ",", ":" and ";"). Punctuation signs are also very close to the preceding chracters. 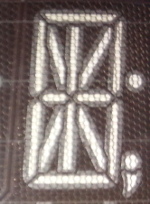 The command used to send text to the main display is 0x00. The character 0x09 (tabulation) has a special meaning: it marks the beginning and the end of a part of the text to be displayed darker than the usual. This is used to emphasis a portion of the displayed text. Also, as the punctuation signs do not consume a digit, the displayed text can be larger than 13 characters.

Sending data to the Channels display

This area only allows to display 3 7-segments digits. The command is 0x0C, the payload is thus 3 bytes long.

The display also has several flags. Display flags are selected by sending the 0x0A command. The payload is 4 bytes long. Each bit of these 4 bytes represent a flag on the display.

Let's consider the following (we don't represent the acknowledgements here):

The 29 flags I've identified are (should be complete):

the keycode byte consists in:

The key codes are: